Listen up all you cineastes.  I’m taking you to film school today and you know what that means, no talking in the class or the wooden yardstick comes out.

I went to see the film Pacific Rim the other day and I began thinking about how crappy most movies are.  Now you probably think I’m going to piss all over PR, but your camel has gone up the wrong dune effendi, I loved PR.  I think it is one of the best films made in the last 10 years.  Why?  Simple:  zero character development and minimal romance, giant 3D monsters, and giant 3D robots, a cinematic formula so simple and winning that you wonder why nobody thought of it a long time ago.

Oh but wait, somebody did think of it a long time ago:  the Japanese.  These clever Asians had pretty much a corner on this type of top notch entertainment for decades and for some reason nobody else caught on.  Even after the so-called live action giant monster fests went down the drain the tradition carried on via Japanese anime.

Meanwhile Hollywood, fat and jaded by chick flicks, Disney fare, musicals, and “important” art films passed on what could have saved a lot of California studios.  Hollywood had the technology to pull it off but left it to the Japanese with their inferior cinematic resources to carry on the tradition.  Ultimately the live action Japanese fare failed because of scant resources for better special effects.  The Japanese, largely devastated by nuclear attacks and real monster invasions, had to reallocate these vital cinematic resources just to survive.  Their ability to carry out believable special effects was severely compromised to the point where putting a lush in a rubber suit had to suffice for action.  Great Asian cinema would just have to wait.

Things remained pretty grim until the turn of the century.  After 2000 the movies started to get better, believable giant robots and monsters featured a lot more in films with the Transformers franchise and Cloverfield being critical turning points.  Giant monsters and giant robots were back on the menu! 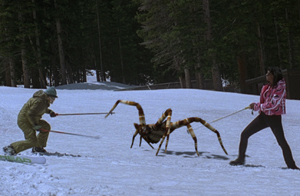 Even television, especially cable, once they wised up and saw the potential, jumped on the bandwagon, with the SyFy (formerly SciFi) network being one of the pioneers with such tasty and high quality films as Ice Spiders and Mastodon.  I think the opening up of the mega channel cable industry actually had a lot to do with the resurgence of the genre with endless reruns of Andy Griffith and Gilligan’s Island driving people to demand smarter fare.

Finally, digital technology, IMAX and 3D made the giant monster and giant robot essential cinema viewing.  Now the only excuse you have for not being entertained and informed about the state of giant monsters and robots is being able to come up with the 15 bucks for a ticket (you can always sneak the concessions in in a picnic hamper).

Next time out I’m going to prove to you why, other than the TV program NCIS, monster and horror TV, and especially movies, are the most important and fulfilling entertainment you can watch.  I promise, and you already know you can depend on me.