When I was a kid we used to go on field trips from school or my parents, usually my Mom, would take us to the big museums in the city. Now if you live in some Podunk city like I do now, even if it’s a pretty good sized metro area like Charlotte, NC, you aren’t going to have the same experience. Your museums are crap. No real mummies or tombs. I’m talking about the old museums where they had all the stuff the imperialists stole from the rest of the world. Anyway when I was a kid we went to the museums that were left over from old World’s Fairs. My favorite was the Museum of Natural History because they had so many freaky things in it. I mean really freaky things. Cool stuff and it was real not some special effects re-creation rubber crap.

It’s hard to know where to start so I’ll start where we always started, everyone’s favorite: shrunken heads. The museum had maybe a dozen real shrunken heads from South America in this glass case. They were so cool. Now most of these were of natives who I suppose were always whacking each other’s heads off Hatfield and McCoy style anyway. We didn’t care about them in our ethnocentric childlike way. But there were two that were Europeans (I’m not sure how they determined the nationality; they all looked pretty much the same) and that really freaked us. I always thought: What if that was my great, great, grandma in that glass case with all those other heads? They showed how they made the heads with real photographs too. They outlawed trade in shrunken heads in the 1920s or 1930s for obvious reasons so a lot of museums don’t have any heads. They also had shrunken monkey or I suppose chimp heads but these were strictly novelty fare. However if real ones (monkey I mean) had been for sale in the museum souvenir shop we would have definitely bought them. See you’ve got to live in a city old enough, and big enough, to have important stuff like this.

The next thing we always went to see was the Pickled Punks (I stole this from carny talk but that’s what we all called them too). The Punks were real human fetuses at various stages of development preserved in big glass jars. We always wondered where the ones that looked like an almost born kid came from since they looked perfectly normal and we felt kind of sorry for them. There were a few freaks too, two headers and the like, but we actually didn’t look at these much. I’m not sure why. The regular fetuses were the main attraction.

Next was always Roast Beef Man. Roast Beef Man was this guy they sliced in a giant deli slicer like you get cold cuts from. They sliced him sandwich thin and put the results in a series of parallel glass cases so you could see progressively all the way through all the organs and stuff, even the dick (We thought this was just the greatest of course, especially on school field trips with girls.). We always wondered how they sliced him so thin (this was way before cutting lasers were common), well actually we didn’t wonder, we figured they did use a huge deli slicer. Can you imagine pushing that guy back and forth across the giant rotating knife and seeing him come off like pastrami? 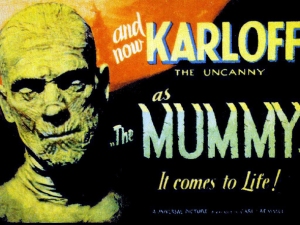 After the Thin Man came mummies. They had a lot of crap from tombs and all, but nobody wanted to see that, although the reconstructed tomb itself was pretty good. We really wanted to see the wrapped and unwrapped mummies. There were Egyptian ones and South American ones. None of them looked like nor were as tall as Boris Karloff, which was always disappointing. I always wondered why you could dig up these people from their graves and show them off. Think about it. In a couple of thousand years they’re gonna dig you up and you’re on display for everyone to see in some museum. Not a pretty thought, but maybe better than worm bait.

Next were those dioramas showing life size cave men in supposedly contemporaneous surroundings. They never changed, and looking back on it now I wonder why, since anthropology and archeology kept discovering new things about prehistoric man even back then but the dioramas never changed. They probably still have the same ones now. The Carboniferous era dioramas were cool too because they had dragonflies and their ilk that were as big as a toaster oven. Here’s a good question. If all the oil and gas and coal and diamond comes from plants and animals in Carboniferous times that were all squeezed up and transformed by tectonics or what not, why doesn’t it still happen now? Why aren’t we getting all squished up and turned into crude oil. Think about it. Did dinosaurs just not get out of the way when a big continent came rushing up at a few feet a century? Then it’s like, okay, crude oil production is geologically done now. That time is over so on to the Renaissance or whatever.

Finally dinosaurs; those giant bone fossils put back together and dwarfing the museum space. Brontosaurus and especially the full size Tyrannosaurus Rex were the favorites. Now I guess they didn’t have enough fossils all the time so they always filled out the exhibit hall with “reconstructed” skeletons made out of colored paper mache or something. These of course were of inferior entertainment value and thus shunned by us when we identified them as crude fakes.

There were still endless things to look at in the museum but these were all the primary attractions. Nobody wants to know about or look at dioramas of things crawling out of the ocean for the first time or fossils that were smaller than a Volkswagen so lunch at the crappy cafeteria (no McDonalds in the museum back then) was usually on tap by this time and after that either back on the bus (field trip) or begging Mom to leave ’cause we were bored now having seen all the worthwhile attractions. 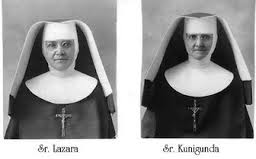 For some reason it seemed like every time we went to the museum there would be some big group of Orthodox Jews and/or a whole bus load of Penguins (= nuns) at the museum. These were both an oddity to us although there were inevitably reformed Jews and a lot of Catholics in our school group. What do they do round up all the nuns in the convent and take them on a field trip? What are they interested in in a museum? Probably shrunken heads, Pickled Punks, and Roast Beef Man. I wonder if they always go to see the shrunken heads first. Maybe it’s one of their missionary friend’s ancestor. Nuns are already creepy so a nun shrunken head would be super creepy. They should make a little habit to go with the head but headhunters probably wouldn’t think of that.