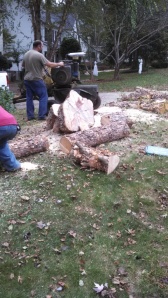 Well my dumb-ass neighbors cut down all the trees in their yard.  Yep, I have pictures.  I guess it’s their right and whatever but geez talk about taking the property values down besides the cost to have a bunch of rednecks come in and do it.  These weren’t diseased or anything.  These were BIG trees.  My neighbor is just too lazy to rake his leaves.  He has been hacking down the larger trees in his lot for several years now and pruning the ones that are left real goofy so they look like those alien trees with all the leaves way up high and nothing down low, no branches or anything.  Now where I live you want all the trees you can have because the sun beats down like a bastard most of the year.

I bitched and moaned all day at the tree service for trespassing on my property and I was watching them like a hawk to make sure they didn’t fell something into my yard.  I made ’em move the logs and stuff they kept putting over my property line.  I was pretty much an asshole all day.  My neighbors weren’t home at the time but I’m sure the tree service guys told them how nice and friendly I’d been all day. 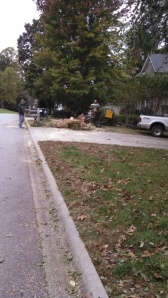 My neighbor is goofy anyway.  He has three beemers and says he can’t afford to have a second kid.  He said he had to buy a beemer station wagon when they had the one kid because he couldn’t stand to not drive a performance car.  He got rid of cable and DISH but pays these geezers to come chop down all these perfectly fine trees.  He leaves his family to go to races and stuff by himself even though his kid is still little.  He designs tires for a living but he hates his job, he pretty much hates to do anything he doesn’t wanna do, which I guess is alright, but he’s still nuts.  He does everything for himself and pretty much ignores everyone else including his own little family.  I’m glad I’m not selfish like that.

What they don’t know is there is a curse on their house.  The Stephen King kind.  It’s worked its black magic in the past so I figure with all this new Mother Nature bad karma hanging around now it’s bound to get the thing recharged.  It’s nearly All Hallows Eve so what better time to bring down some hoodoo-voodoo?  See the last two occupants of the house each ended up divorced after just a few years.  Now I don’t wish anything bad on anyone… 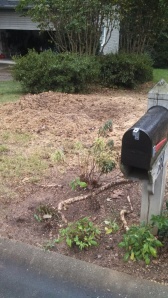